The summer has flown by and I failed to update after almost three wonderful weeks in Canada in May. I went over to assist at the Ailsa Craig Quilt Show which was hosting the quilts of France.We welcomed by the local community and had a wonderful time staying with Gerard and Trucy.

On the Sunday the village had a quilt airing and they hung their quilts outside the house for all to see.

We then moved on the stay with Doug and Marion in Elmira. They were excellent hosts and took us all around the area, we took in a theatre performance of Mamma Mia in Kitchner, Toronto, the Bata shoe museum and dinner in the CN tower, the Niagara Falls and the St Jacobs Quilt show amongst other things. We were in Ontario where the place names reflect its history. I managed to go to London, Woodstock wasn’t far away, nor Stratford, I could go on….. We were in the mennonite country where life has a different value and tranquility. 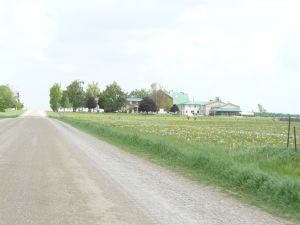 It was a truly wonderful area and our guides were so informative.

I have loads of ideas to transform in to stitching not least the Niagara falls which I have already attempted. Although the falls themselves were impressive it was the upper reaches that i found so beautiful; there was a peace in the water which seconds later grew in to turmoil.

The piece is only small 6″ x 12″ and was my first attempt at needle felting. I could go on about Canada but time to move on!

June and July  here were incredibly hot and the plant life all around, not least my garden has really suffered, sadly the hedge was not affected and has shot up, need to get the clippers out…

August arrived and it was time to head for the UK for the Festival of Quilts. I watched the news as chaos reigned in Calais and wondered if i would actually ever get there, the Gods were with me and I sailed through, did see one passenger removed from car in the neighbouring queue….. with all the fencing and barbed wire it did feel as if I was driving in to prison….

Two nights in Kent and more inspiration from the beach between Dover and Folkestone with my God-daughter Philippa: 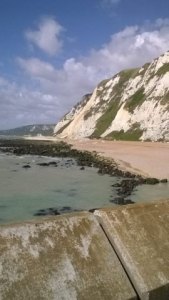 Looking at the middle photo I find it extraordinary that this beautiful scene taken at low tide is in spitting distance of Dover and the heavy shipping traffic in the Channel.

Moving on through the country I had a whistle stop tour of Oxfordshire before arriving at Birmingham NEC. I met up with friends Claudette from Norfolk and Chantal and Fabienne from France and we went to Nuthurst Grange for dinner. I was a real trip down memory lane for me because it was my grand-parents old house and it was there that I knew my grand-father who died when I was 6 or 7. Last year I made a 15 x 15 quilt with the subject of memories and I used a family photo which I distressed which was taken outside the front of the house. It was a really lovely experience and I remember the entrance and the hall with the staircase, the drawing-room is still there and what was my grandfather’s bedroom when I knew him is now a bar!

The real reason for being at the NEC was the Festival of Quilts and we were there for the whole 4 days. it was great to spend time with like minded people, there was so much to see and do. I do not like posting the work of others on the net but I would just like a small detail of a piece by Maggie Vanderweit, A Wing and a Prayer. We were invited to Maggie’s house for dinner while we were in Canada and she showed us her studio. I was blown away by her work and generosity.

While at the festival I went to several lectures, one of which was interactive about how to judge a quilt, I do not want to become I quilt judge but I did want to understand what the judges are looking for. I found this a really useful exercise and think that it should help me in the future. I had a quilt in the contemporary section which I previewed in a previous post and was made on the back of my visit to India,

I also had a piece accepted for the Quilter’s Guild Contemporary Group Challenge, the subject was elements and I chose to work around chlorophyll as I wanted to stay with my subject of trees and leaves.

There was also a group quilt which was made in a round robin fashion by seven of us who had done our city and Guild diploma together. It was a really interesting and nerve wracking experience because we each had a three week period to add our contribution without consulting the others; I started it off by choosing the fabric and snow dyeing it…

The Festival of Quilts opens one’s eyes to what is going on and what one really likes; the first time I went it was a big wow I have lost that facture and become much more selective but I think my ideas have moved on as well! It was a great time for meeting old friends and making new ones.

After the NEC I headed back to Norfolk with Claudette because I had signed up to do a course with Jane Callender who conveniently lives just down the road from Claudette’s house. Cally has wonderful set-up and three of us had a wonderful five days with our hands in the dye vats, a week later and my nails still show the signs of indigo. The weather was good so our work dried in the open air and the vats were outside for us. I discovered the joys of pomegranate, will give me a reason to buy them when they come in to season! I have chosen sections of work I completed to show you, so many techniques and ideas flying around my head….

The journey back from the UK was uneventful except that the Highways Authority in their wisdom decided to shut the Dartford Crossing, and so effectively the M25, for Saturday night, the result was that I went across before it shut and spent a night in the car at Maidstone service area!

At least now I am up to date. It is difficult to show what I am doing when a lot of shows ask that work has not been shown publicly. I will try to keep up to date in the future!