As the count down begins for the OEQC, Maastricht and Vendée Quilt where I will be teaching I realise how long it is since I added a page! It is only because I have been so busy. The summer was taken up with making a quilt for my niece’s wedding which I was determined to finish on time. She chose the fabric, pattern and size . It is 2.5m x 1.5m, I pieced by machine and then hand quilted.

It took a great deal of my time but was a pleasure to do, to personalise it I added embroidery on the darker circle…. 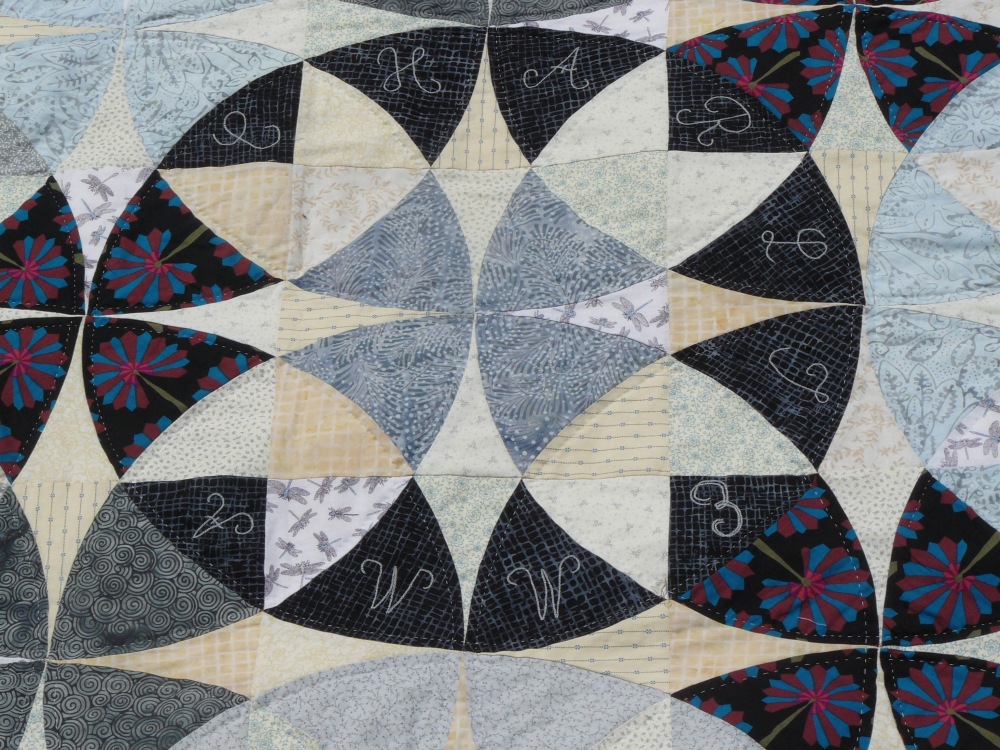 I also managed to get out and about and gather some inspirational photos, during a weekend in Italy I visited a small museum with some wonderful weathered wood, on the wall of an old building.

Then there were roofs and balconies

At the same time it was my turn to work on a round robin group quilt. With the girls from my diploma group we made our second group quilt. This time we all knew what the fabric was like but the work was handed on ‘blind’ and we had to add the next step. In theory I was the last in the process but there was more work than I had time for so others had a hand in the finishing touches. Working on something that in a sense, one has no control about, is fairly nerve wracking but a great exercise. the finished piece went off to the FOQ in August. 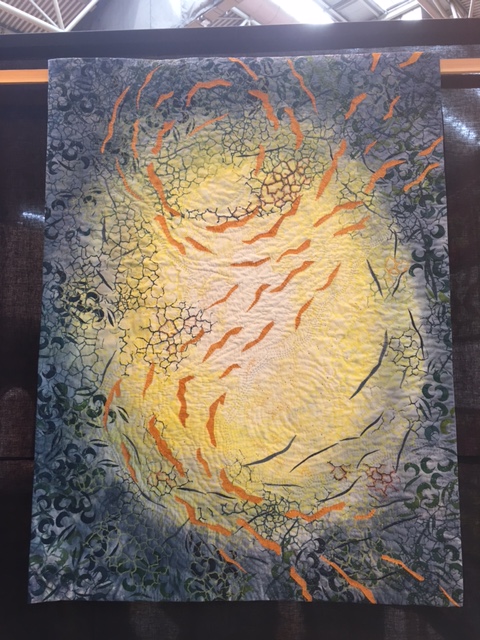 This year not only did I teach at the FOQ but I was also a quilt angel, looking after the judges. It was an interesting experience, I walked miles and thoroughly enjoyed my day! The teaching went well and my classes were more or less full.

Either side of the FOQ I spent time in Kent where again there were photos to be taken to inspire future work. My idea of layered work or screening is often reflected in the photos that I take. I am drawn to wrought iron work, the patterns crated have all manner of possibilities. In Folkestone there is a whole walk of art works…. 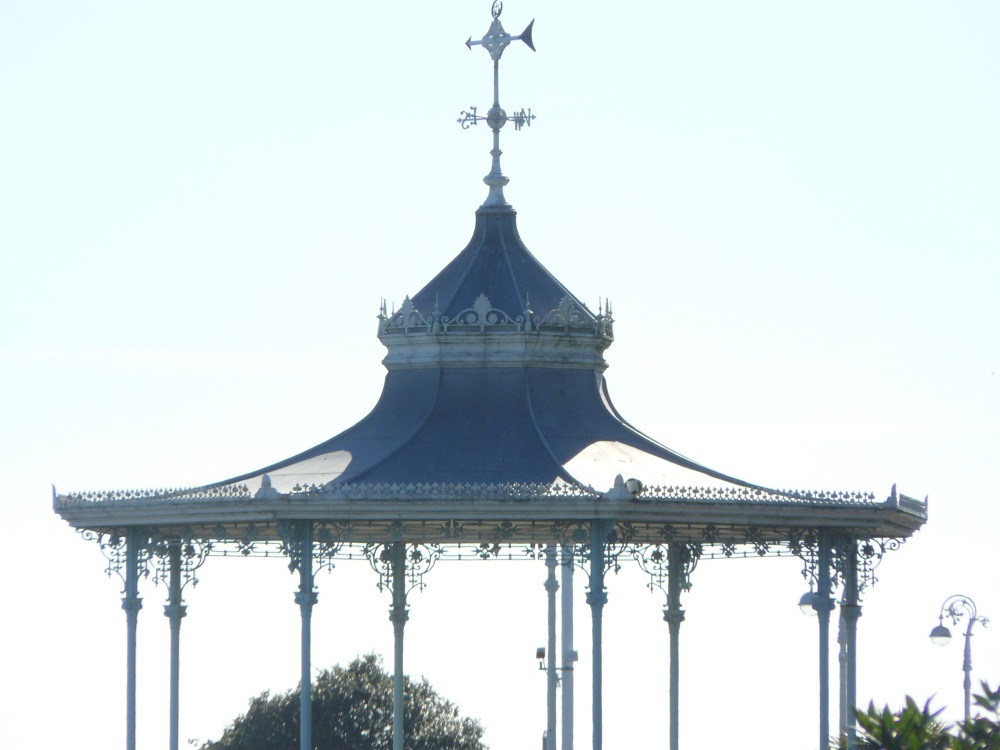 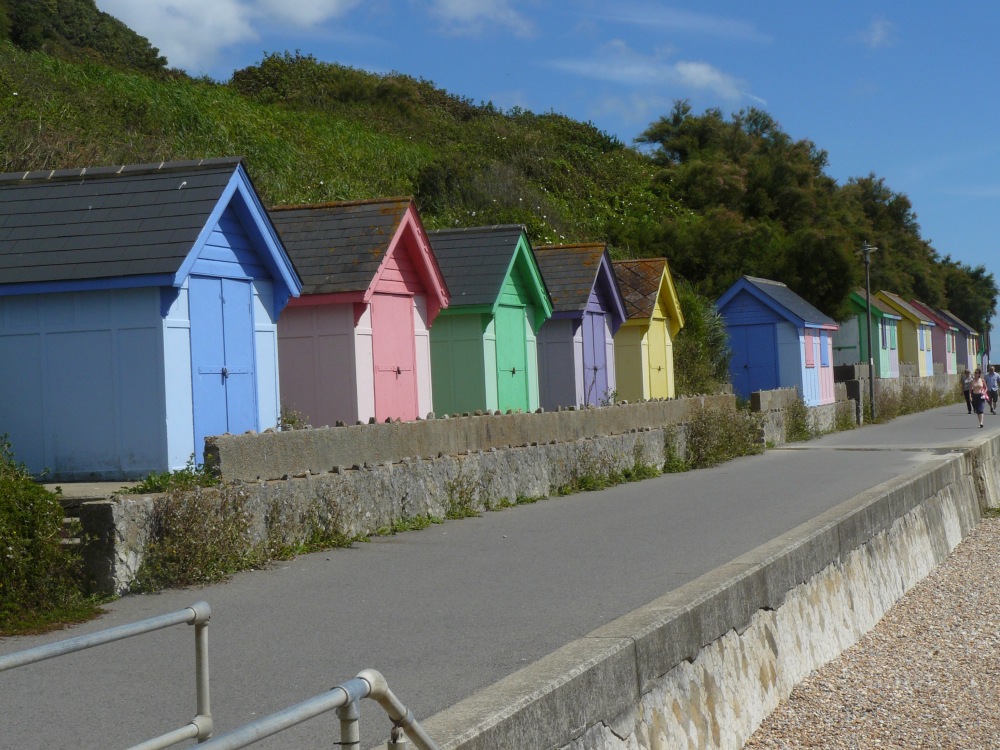 and a bridge across the military canal. 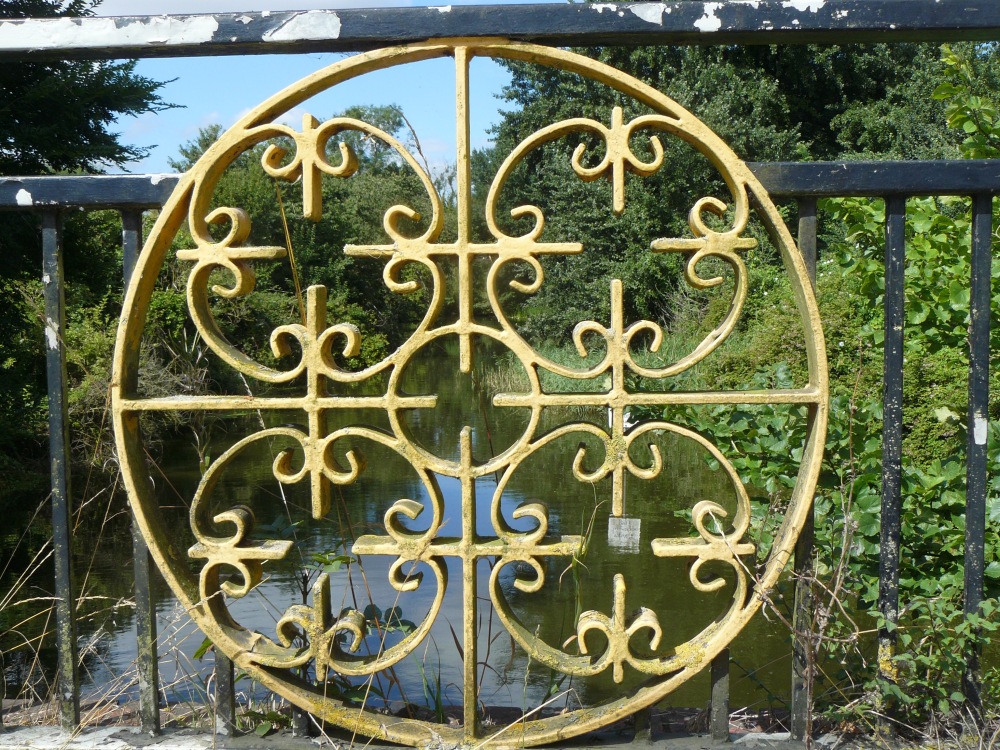 Back in France I had journal quilts to do before ten days of hectic volunteering for a big local race. The July JQ was made using the cut outs of the previous month

and I continued the lines of the background fabric over the appliquéd cut-outs. For September I decided to stitch the screen in-front, the photo doesn’t show it very clearly because the thread is metallic and maybe a bit too thin, but the pattern is one I found on some Indian fabric in the Delhi Craft museum.

Having made the decision not to go to Ste Marie, rather late in the day, in order to get some sewing done, I was given the chance at very short notice to go to the Creativa show in Lausanne which required getting myself organised. I had a large display area and spent four days demoing and explaining the difference between textile art and patchwork. 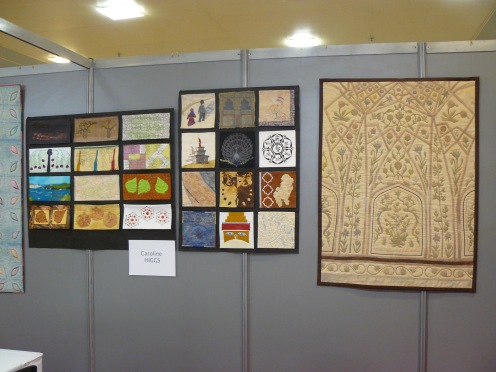 Before setting off there was a weekend show which I was helping with, it was a challenge between two towns/areas, Chamonix and Garmisch-Partenkirchen which are twinned. The subject was ‘my favourite season’. I produced a piece entitled The First Frost. It was a trial of different techniques and double dyeing.

In this period of business I have also completed two quilts for Fifteen by Fifteen. For the first the subject was architecture which had to use a stencil. I chose to do a step well from a photo I took in India. 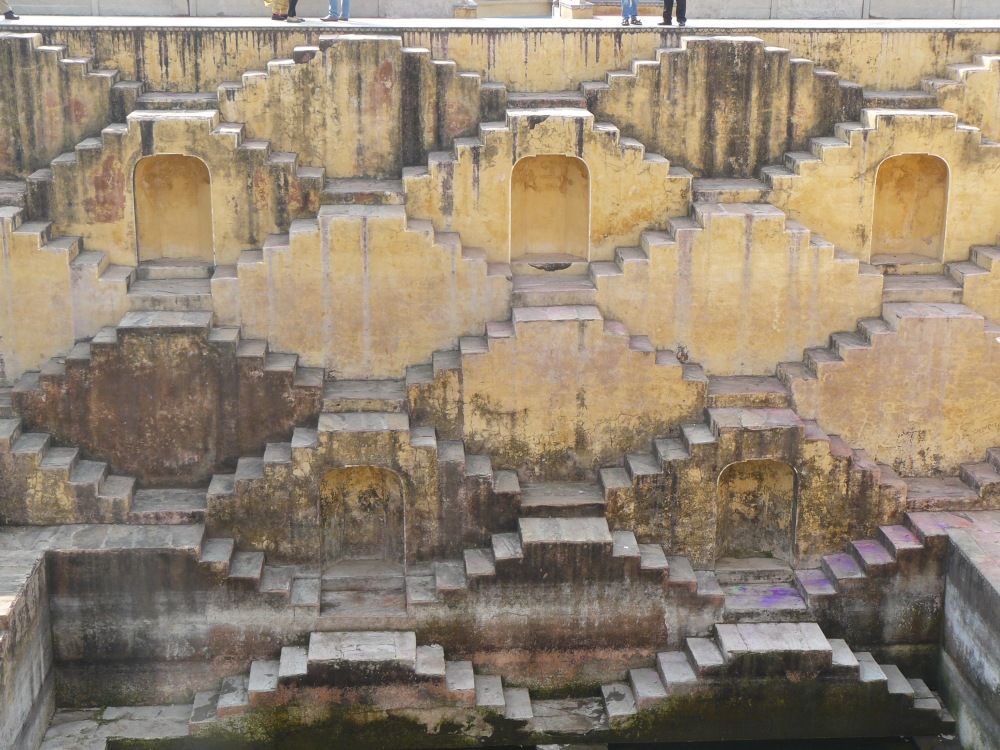 The steps were stencilled and I decided that more would be less, the noile fabric had enough texture to represent the texture of the stone and I used paint and sponges to add the water marks. 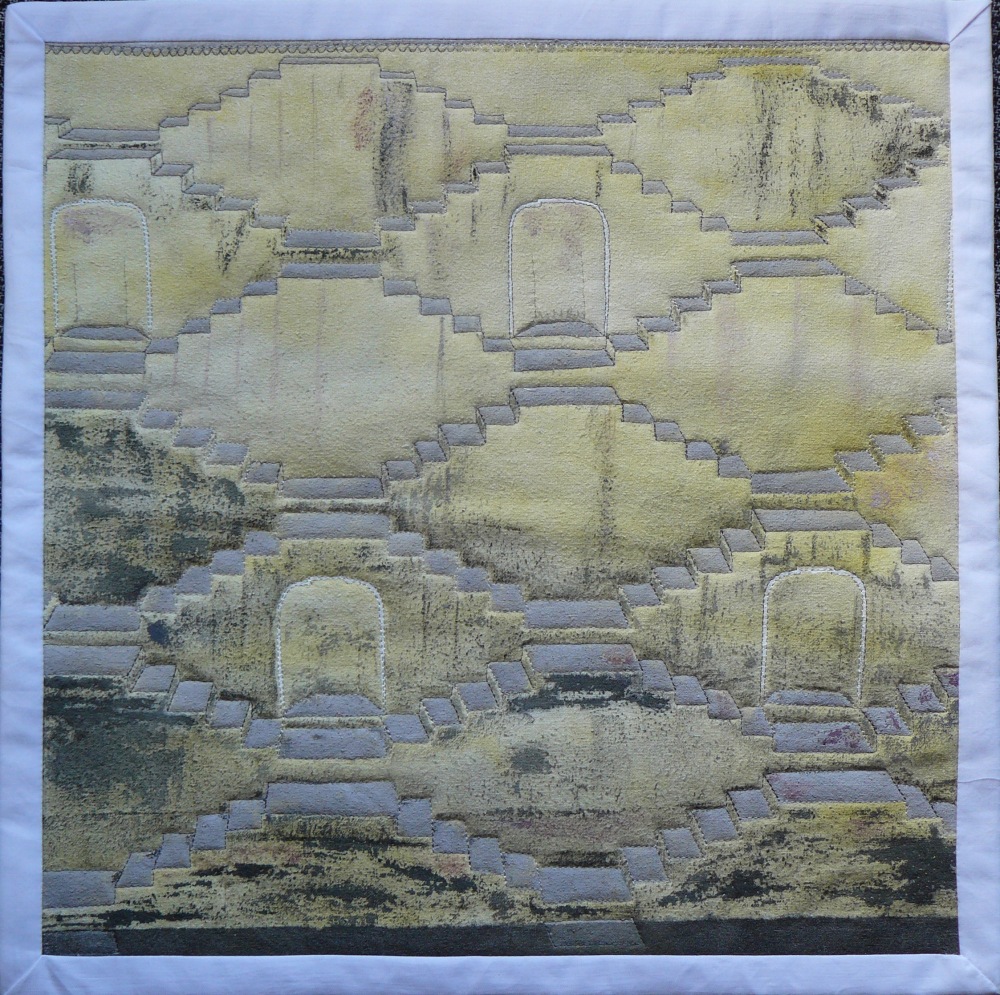 The white edging was to represent the edges of a photograph. I should not have photographed it on a black ground a lighter colour would have been better. Detail below:

The last challenge was Botanics, I was off subject because I had misinterpreted it to suit my idea! I wanted to continue with screens and wanted to use the flower as a screen rather like the Japanese wood block-prints, I am not sure whether it is a dahlia or a geranium but , after also looking back to my notes about Fibonacci, I free hand drew my flower on mulberry paper which I had painted, the brush marks should have radiated from the middle rather than going horizontally. I sun printed leaves on the back drop and then lightly embroidered them. I was fairly happy with what I produced although the time constraints probably didn’t help! While teaching I advocate that the bindings should be planned at the outset, this is an example of a panic to find something suitable, as the piece was flower/leaf orientated I used a commercial fabric with an unobtrusive floral pattern which I decided tied in nicely.

The detail shows how i have rolled the cut edges with an acrylic wax mixed with a silver wax to add a slight sheen in part which doesn’t show on the photograph.

The final piece completed is the September JQ, I played around by printing with a block I have used previously and added the colours with paint rather than cutting away to show the colour behind. It is hand quilted and there is added chain-stitch detail along the spaces created by the print. 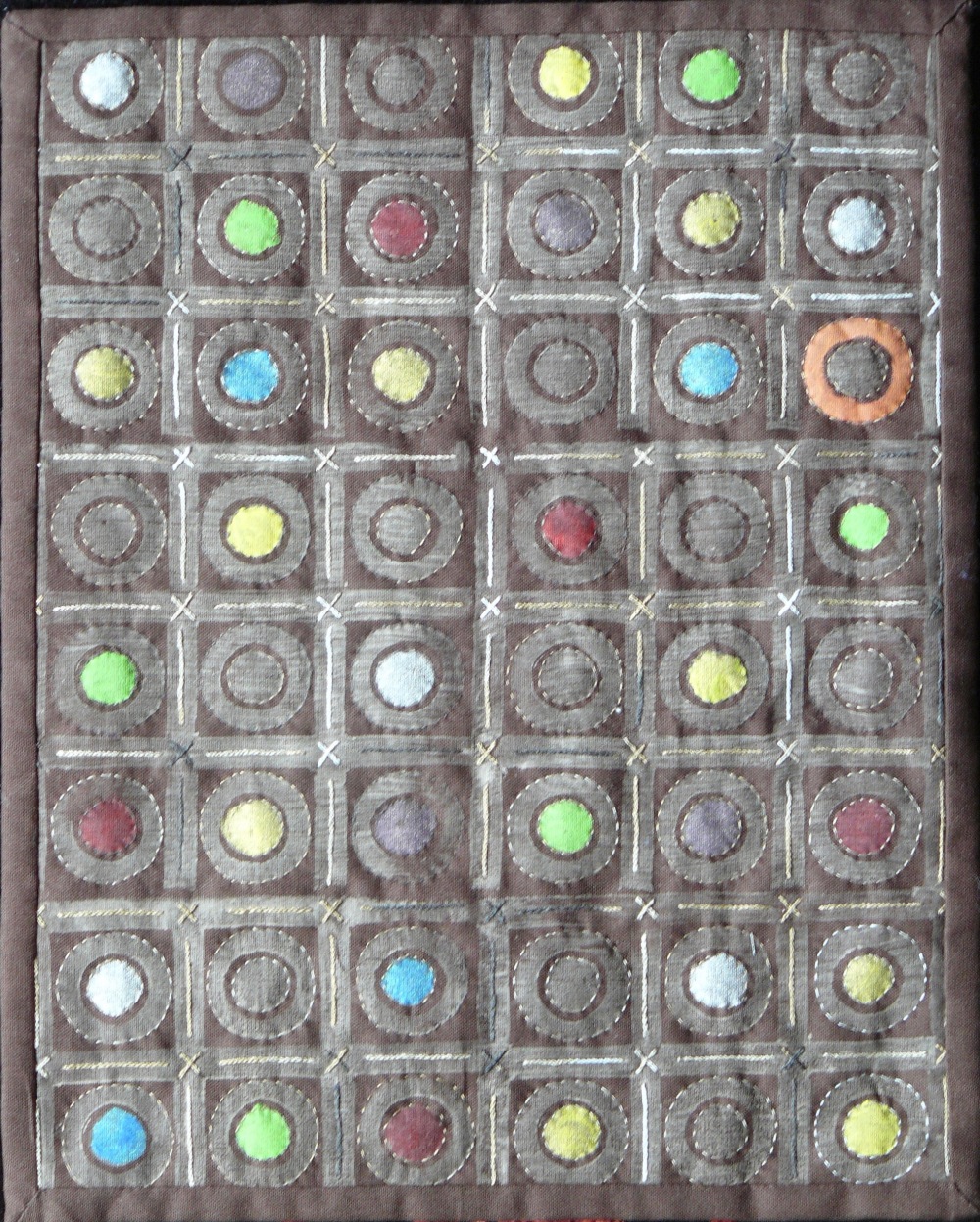 With the news that my piece for the SAQA auction has sold I will attempt to keep up to date from now on.