Well in theory holiday time is here, in fact not a lot has changed I am still happily at home with no real desire to go anywhere. I have been tempted to venture further afield but I prefer solitude at home rather than wearing a face mask amongst strangers. I have been busily stitching since I last updated this blog but as virtually all my targets have now melted and disappeared, for the time being, I find myself beginning to relax. This doesn’t mean that I won’t be continuing to stitch frantically, it just means that there is no pressure to do so. I am doing an on-line course with Sue Stone which I began at the beginning of the year knowing that I wouldn’t really be able to commit much time until the autumn. Then, at the the beginning of lock-down the textileartist.org produced weekly challenges with other textile artists , it was really great to have workshop followed by a Q&A session each week, I didn’t do them all but I did listen to them all. The they started the Stitch Club and I am just beginning to catch up on that. There is no pressure to complete each week but I love listening to what inspires artists and see how others interpret the project. I intend to spend more time trialing ideas and ‘playing’.

Much of what I have been working on has to remain under wraps until it has been exhibited publicly but there are a few other projects I can share.

There have been various panics about not having what I most needed in the sewing line, in my confused state I had completely over looked the fact that I could dye my own threads because recently I have done far more painting than dyeing. When I dye fabric I also tend to through thread in at the same time that way my thread and fabric match. 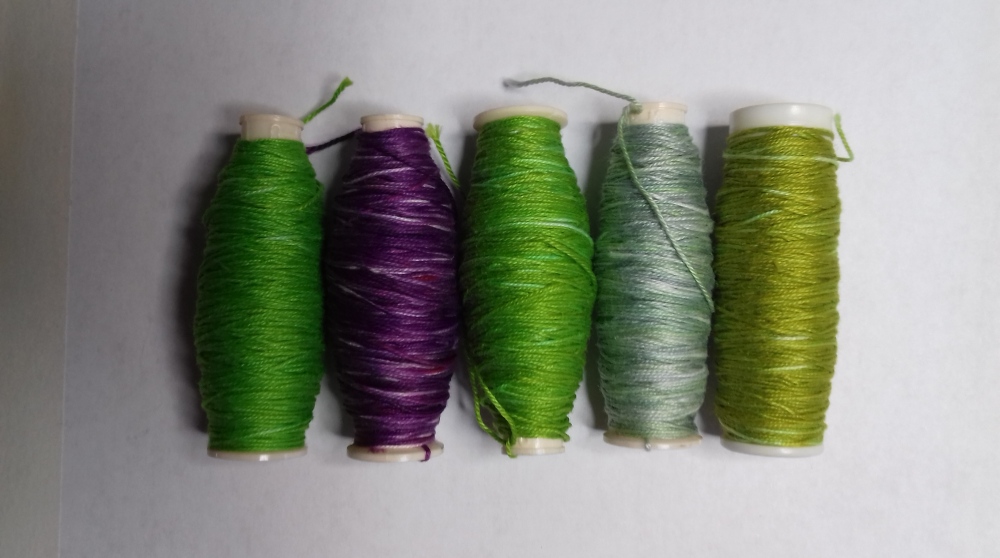 I have continued to photograph things as I walk, I am beginning to have a large library of flowers, my phone is very good on close ups less good on landscapes but I glean inspiration nonetheless. 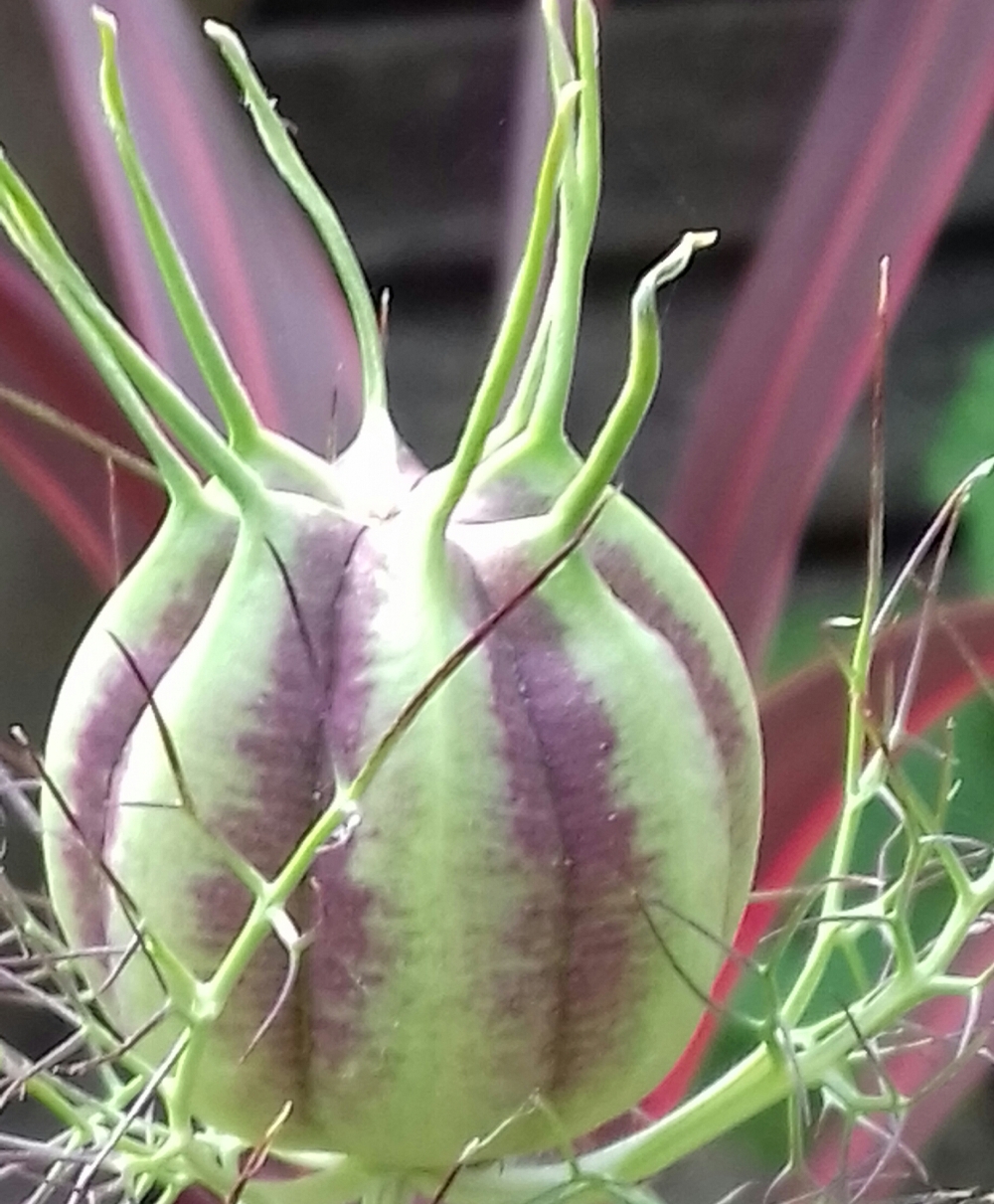 There has been another piece for Fifteen by Fifteen which was the letter ‘C’. I chose the Cinque Terra and Corniglia in particular. As I have probably said more than once I like the idea of layers so I used a slightly rusty old iron balcony in the foreground, cut in black interlining and de-coloured, with the village painted in in the background, well the form of it and the colours which were then machine stitched. I then hand-stitched the balcony in to place. it is bound in white because this year all my six pieces finished in this way to make them look like snap shots…

There are beads across the middle depicting the C in morse code.

During May I also gave a live Facebook workshop on the Spanish I maraton Covid 19 page. It was slightly harrowing when I couldn’t get the camera to work live on the trial session but after 5 hours of reading Macs: for Dummies, amongst other things, I finally sorted it out for the class. It appears to have been appreciated, despite the fact that I don’t speak a word of Spanish, judging by the number of positive comments I received. In return I was given a virtual medal…

Journal quilts continue and I am trying to use all that I am learning in the workshops to produce them. This one was as a result of a workshop led by Anne Kelly, her style of work and mine are poles apart but I was intrigued to give her method of working a try. I recycled an old linen napkin and cut it to size to keep the finished edge intact. The whole thing is machine stitched which holds everything in place and it is really interesting to see how the tight stitch really changes the density of colour.

Other workshops have been exercises in the different ways of using basic stitches which I have enjoyed. Focussing on one type of stitch and using it differetn ways really makes me stop and think and there are so many possibilities. 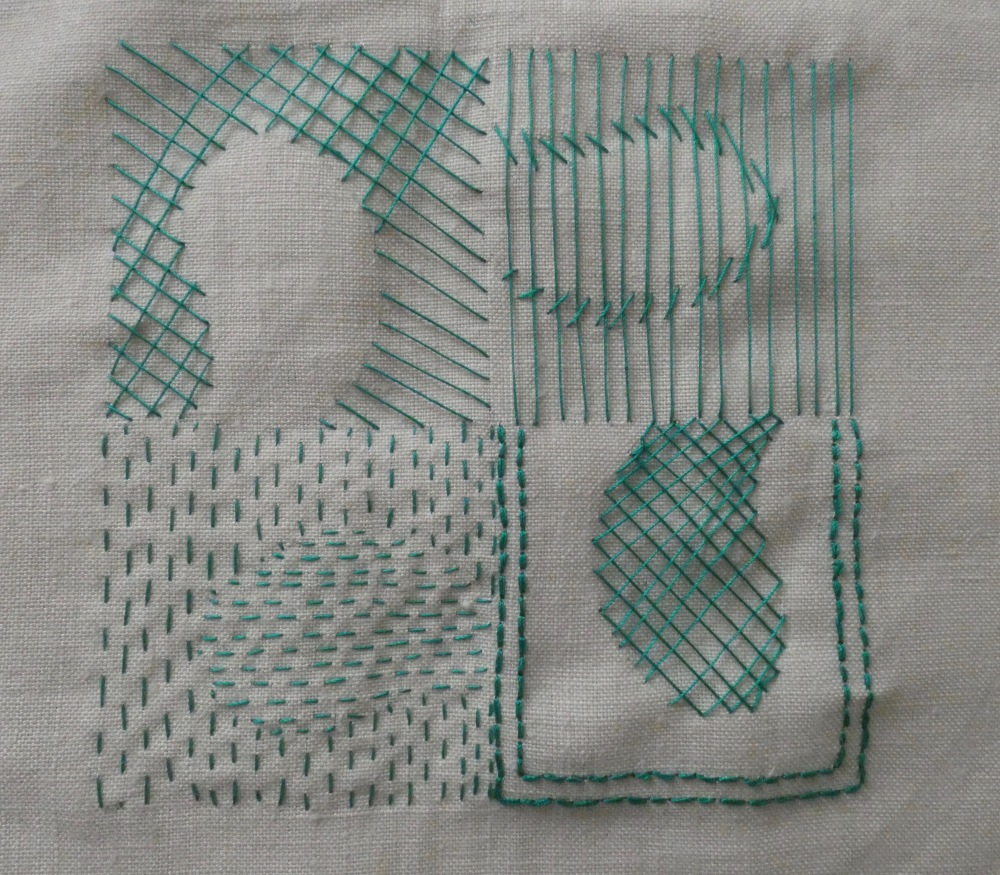 While sorting through my lace bits and bobs I found a collar and cuff set from Malta, I don’t know which grandmother bought them by I now need to find a special use for them.

The last workshop I did was with Mandy Pattullo, again her way of working and mine are very different, I watched thinking that I wouldn’t take the project any further because I consider myself a maker of books but I got hooked and produced a small concertina book on India. I had an idea in head but as I looked at my fabric scraps it morphed in to something quite different. India is a land of contrasts so the book tells that story, the base is a rough hand loomed cotton while most of the fabric is silk, the stitching which is hard to see in the photographs is either in contrast or matching the fabrics at same time creating texture. The scraps of fabric I chose all represent different facets of India, architecture, gardens, colour and bling. The story begins and ends with cotton, the elephant from a block printing demo and the end a pice from a shalmar kameez set I had made for me many years ago. The covers are lino and wood block prints… There is in my mind also the contrast between the tatty and chic….

Finally I once again have work on display at the Cabane de la Mairie just down the road from home right on the coastal path.

I had an idea of teaching small classes there but without the contact with people it has fallen by the wayside for the time being. It is strange how while I am busy at home I forget that things are different beyond the garden. I am so grateful that that the art textile community is there and so much has been going on through social media, it is such fun connecting with people world-wide…. Onwards and upwards!