The advantage of living on the Franco-Swiss-Italian border is that so many places are so easily accessible, and that is why I found myself spending the better part of last week in Venice, well Cavallino to be exact. Dijanne knows Venice very well and it was really good to be with somebody who knew where they were going. I am sure that I am going to asked what I saw, the easy answer is that I saw Venice, there is so much to see and do and all except the fourth day it was lovely weather and we walked. Staying where we were meant taking the boat and by buying a 72 hour transport pass we managed to spread it over 4 days.

The first afternoon was spent on Burano which is known for its lace making, a lot of the lace is now made elsewhere but we did meet some ladies working in a couple of the shops. One shop had an enormous private collection of old lace, a lot of which we were unable to access due to renovation work but what we did see was wonderful and dated back to the 1600s.

The island itself is beautiful, the houses are all brightly painted in all manner of colours and away from the main street there are very few people and it is very peaceful. (In fact that was the same for Venice itself, we were ‘out’ of high season but with an average of 100,000 tourists a day there were still people around.) 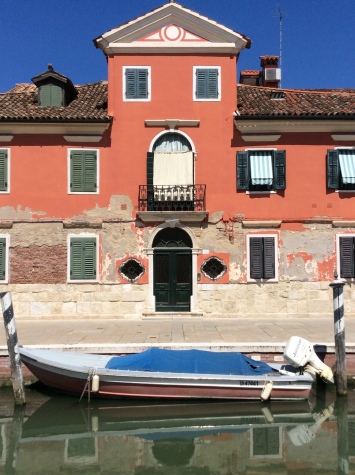 There were inspirational  ideas for future textile work everywhere I looked and I hadn’t even got to Venice, I just love the haphazard juxtaposition of the colours, reflections and shadows…

We decided to make the most of our time by getting the 6.59 boat in the mornings to avoid the crowds, this was an excellent idea and the first morning we changed boats and went on up the Grand Canal. 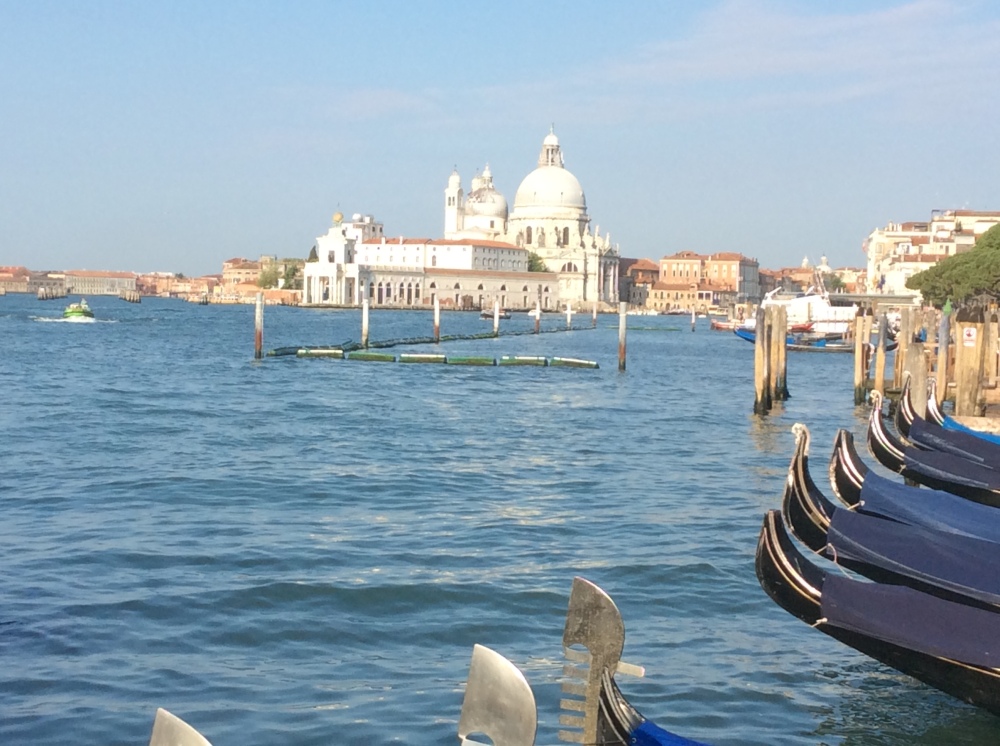 Before visiting somewhere as well photographed one obviously has an idea of what one is going to see but I found it far larger than I had expected. Due to the early hour the ‘trade’ boats were about and busy and it really made one realise how complicated living in the city must be. I love the wine jeraboams and the rather smart chairs with the delivery crew sitting on them: 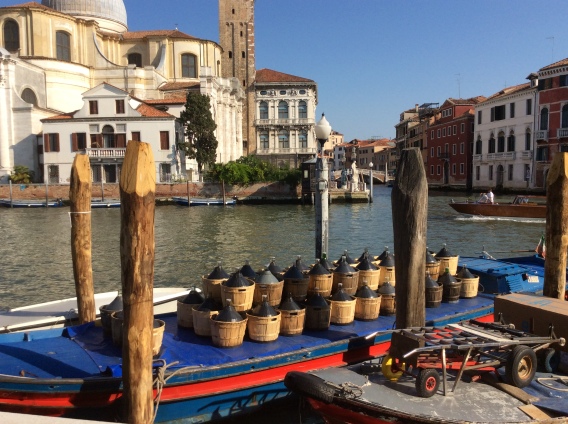 Then of course there were the more artistic sites:

Walking around a place so full of inspiration one is always drawn to the things which have a personal design dimension. There was a lot of wrought iron work which suits my growing library of photographs for a future project, there were as one might expect masks.

Then we managed to be in Piazza San Marco while it was empty, well there were the pigeons but very few people, the real plus was being able to have a quick look at the interior of the Duomo before it opened to the public, sadly no photographs are allowed inside, but then something has to be left in one’s personal memory card. The work on the outside of the Duomo is stunning, the sort of building where one would see something different at each visit.

There are then also the sights which are unexpected.

Two things happened which were totally unplanned and really good. It was the  beginning of the Venice Biennial which we had thought that we would visit but the more that we learnt about it and after visiting one of the fringe events we decided that it wasn’t for us, it seems to involve a lot of film and sound. However as we went back to the boat we found an independent exhibition of work by a Bosnian artist, Safet Zec, who now lives in Venice. I had to leave the exhibition because the emotion he expressed in his work was too much for me. I did go back in and we visited again a second time but we were both blown away by the emotion  expresses in his work. This particular exhibition, Exodus, “draws from the biblical dimension of the exodus of thousands of migrants arriving in Europe” and is a subject which has made such an impression on me after me visits to the Gambia. The artist himself has “experienced eradication, escape and exile when with his family he was forced to abandon Bosnia and their war torn city, Sarajevo”.

I don’t usually post pictures of other people’s work but this exhibition moved me more than anything else I have ever seen, this is just a small part of one of the main pieces : 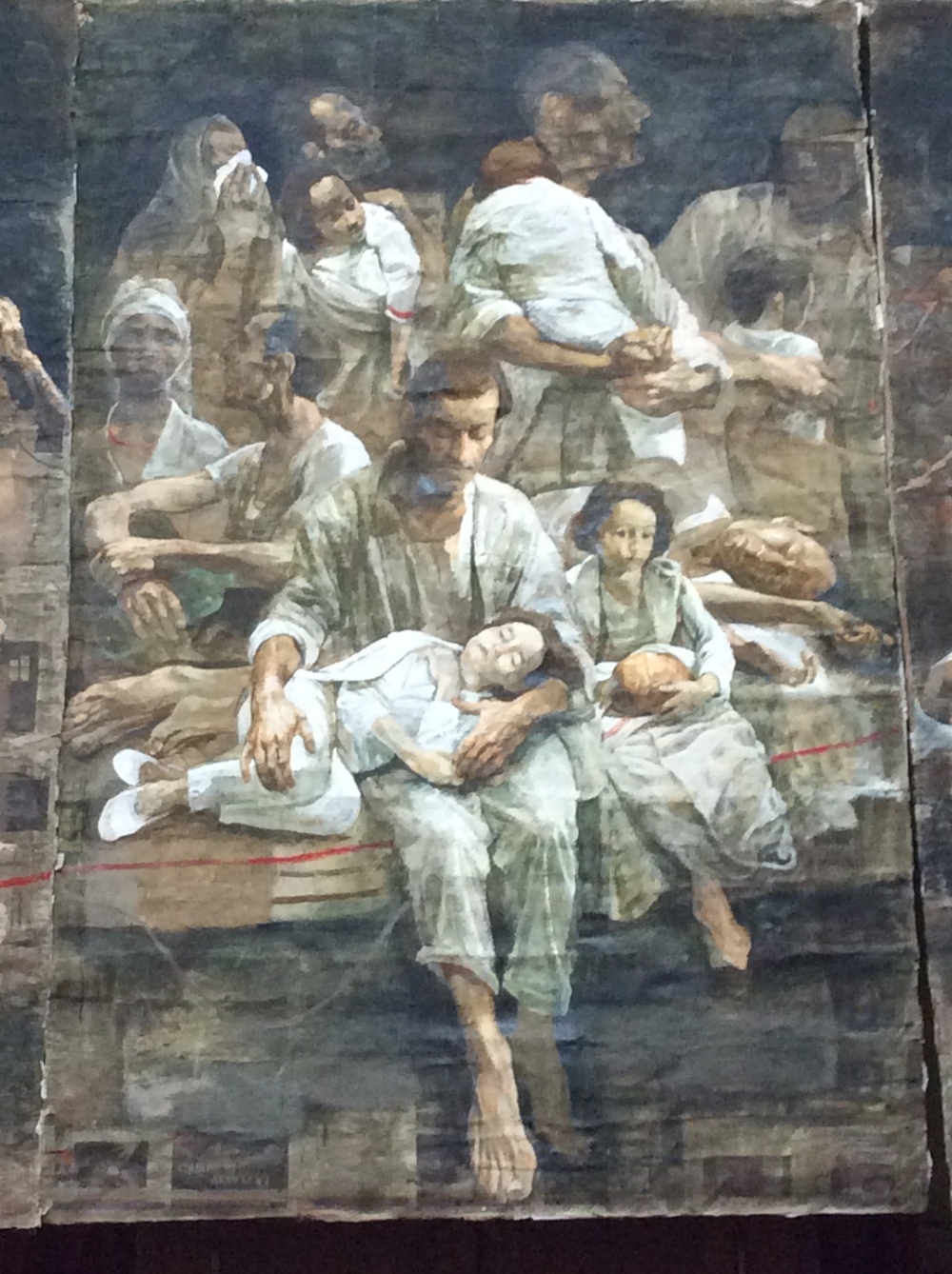 and this one is a detail of another and his provisional sketches for the piece.

On a more cheerful front we did a morning of mosaic at a studio which opened at the beginning of the year and which is run by two mosaic masters Alessandra de Gennaro and Romuald Mesdagh. It was a really good experience to be taught by somebody who is so passionate about their craft and who is so happy to share their knowledge, I became far more engrossed that I had expected to be and actually managed to finish my small square. While we were working I got chatting to Romuald in French and found that he had lived very near me years ago which was such a coincidence.

This is one piece in their studio which I really liked, mosaic in a modern form. They also work in glass and produce wonderful commissions http://www.artefactmosaic.com. The final photo shows Dijanne discussing something with Romuald and Alessandro in their studio at the end of our course. (In the background of the photo is the most wonderful print shop which produces unusual small books and lino-cuts).

Now all I have to do is find the time to use all my ideas. I have come back with a new pen and some great powder paints from a shop which has the most incredible range of natural pigments.